On the road to winnipeg - November 16

It's in your cards 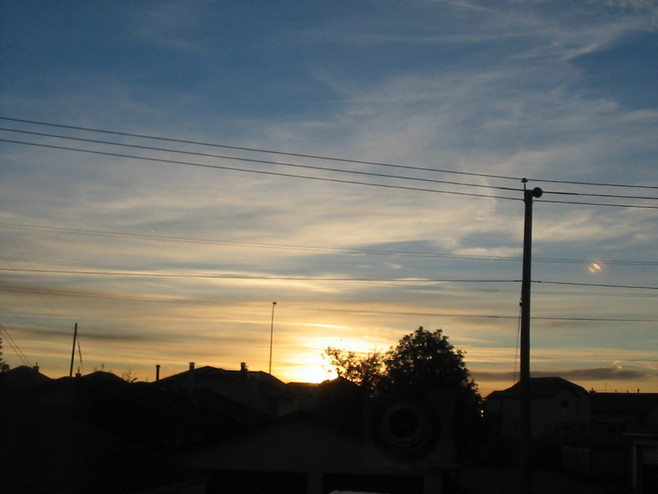 Leaving some random town waaaay too early in the morning. Why are people awake at this hour? It's stupid. 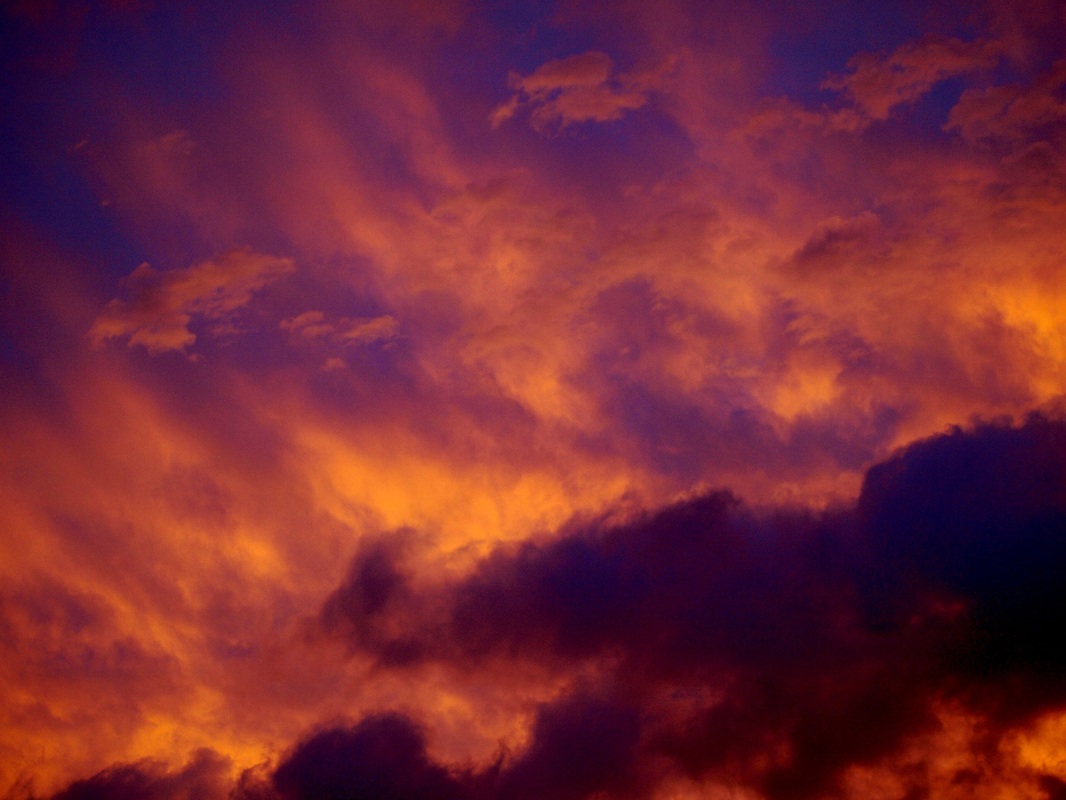 The sky is on fire

For One of our first Boiled Cat shows, way back in the day, Jayson decided we should all dress the same. Not only dress the same, but wear suits. He had just left a punked up blues band called Apocalyptic Blues, and his head was a little rattled or something.  Well, we all went along with it. You don’t go against Jayson. He’s like a river on rocks, he wears you down. So there we were at the Bomb Shelter, a brand new four member band. Jayson singing and playing lead guitar, Kevin on rhythm guitar (this was before he started bringing in every instrument known to man), me on bass, and Paris on drums. Paris hated the suit. He’d worn enough of them during his time traveling the world with his missionary parents. I could tell it wasn’t going to last long. He kept pulling on his tie like it was strangling him and he had that look in his eye. He'd already slit the whole thing up and safety pinned it back together. Jayson actually liked this and copied him, adding the word FAMOUS spray painted on his own back. But even with the suit looking pretty good, Paris still wasn’t happy. About half way through the gig the audience started going crazy. I looked back and there’s Paris pulling off his clothes, not missing one beat in the song. Off went the tie, then the shirt – I still don’t know how he kept playing doing that! Then his shoes, socks, and pants came off. Soon he was down to his underwear. Then those came off. It’s a good thing he’s a drummer. At least his kit covered up most of him. That was the first and last day for those suits. Jayson kept his for a while but he let the rest of us wear what we wanted. Sometimes I think about getting him to bring them back just to see what Thrash would do if he were forced to wear a suit on stage. That could be interesting. 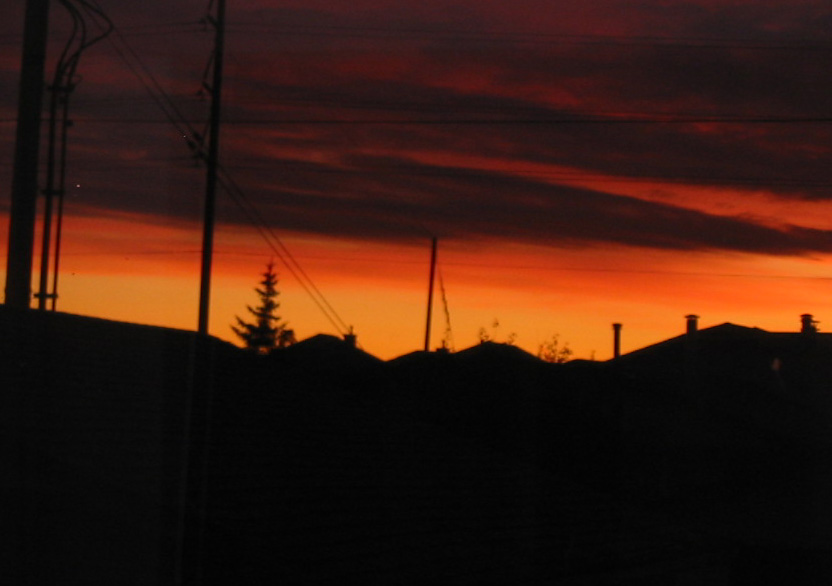 Arriving in yet another small town after a full day of traveling. 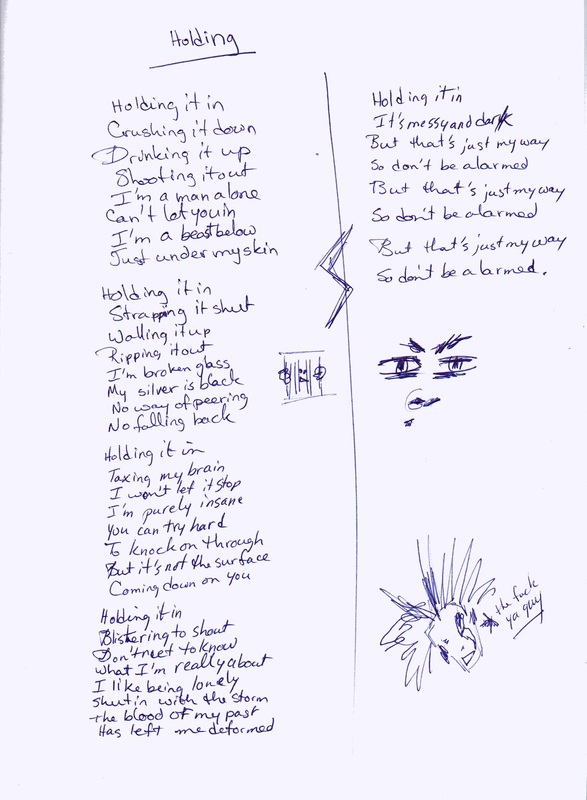 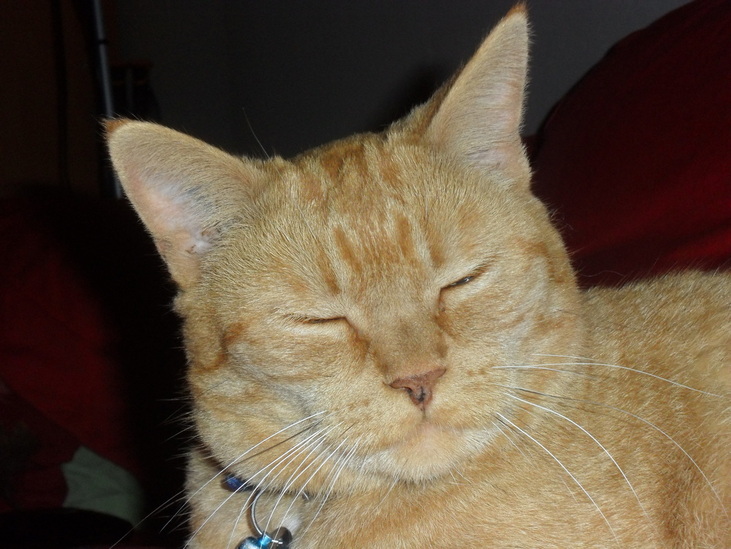 Zeppie doing what he does best - sleeping.

The sun will come out Tomorrow 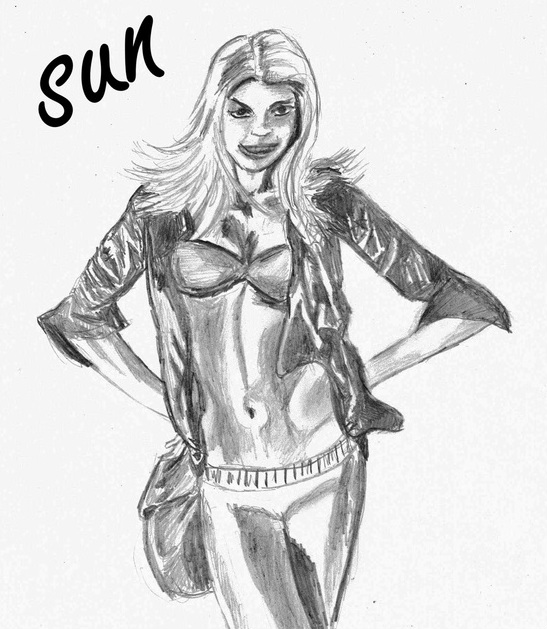 Things that come from california 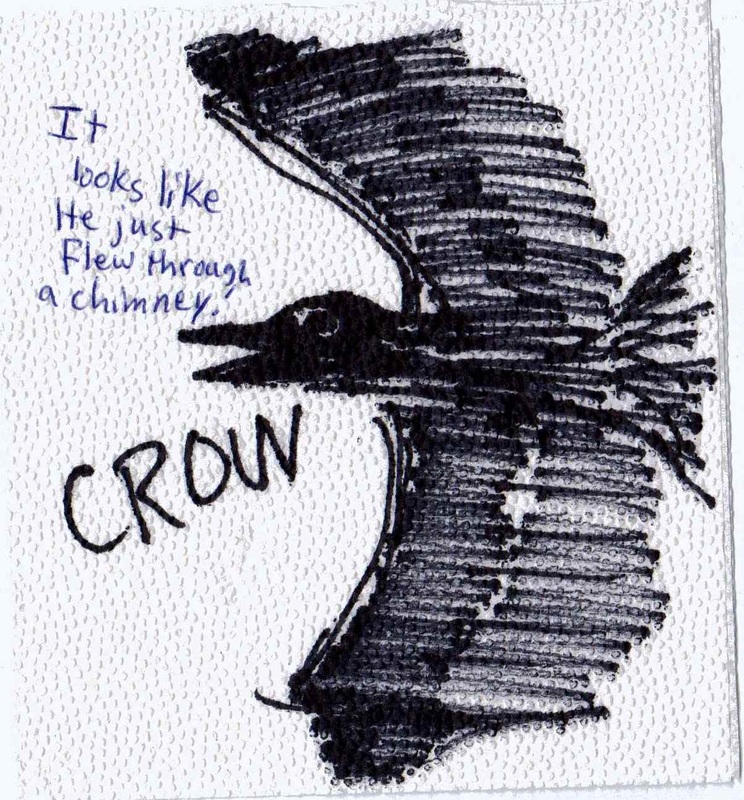 Kevin: Finally, someone from my own country. My own state even! Maybe I can finally have a decent conversation without any French!

Jayson: I don’t care about Sun one way or the other. If it keeps will happy, fine - let her come. but her up keep is coming out of his earnings not mine.

Thrash: She looks flakey. I mean who hitchhikes in Canada in the winter, in a tiny jacket? Mind you it wasn’t too cold a couple of days ago. As long as she doesn’t talk to me, I guess it will be okay.

Paris: That’s one blazing babe. But stupid, Man. And Will, he’s gone. She’s got him wrapped around her finger already. But that’s why you get into this business, for the girls, right?

Will: Wow! She is so beautiful. And hot. And . . . wow! This is going to be the best trip to Toronto I’ll have ever taken. Awesome! 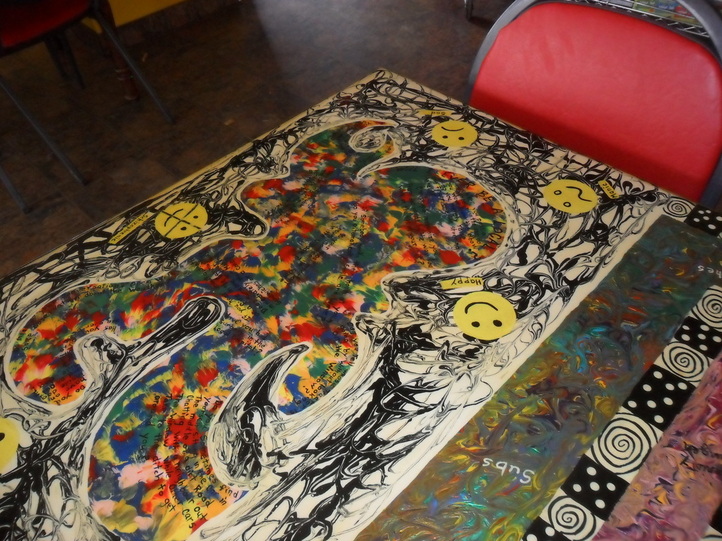 Small towns have the funkiest diners.

SIR FRY (for royalty like me)
Step One: Cut up a bunch of veggies – broccoli, cabbage, carrots, onions,
mushrooms (not technically a veggie but whatever), etc.

Step Two: Gather other veggies – snow peas, bean sprouts, and nuts you like
(not flavoured).

Make the sauce: Open a can of pineapple and drain the juice into two tablespoons of corn starch. Mix it together. (Put the drained pineapple with the cut up veggies). Also mix in a couple of splashes of soya sauce, two tablespoons of brown sugar, a couple cloves of crushed garlic, and a squeeze of ketchup.

cook it: Heat the wok to medium high (that’s between medium and high for those of you who can’t figure it out). Fry up the cut veggies in a couple of tablespoons of your favourite oil until they are shiny but not too wilty. Throw in the rest of the veggies and nuts. When everything is warm add in the sauce you made with the pineapple juice. Stir constantly.

When the sauce thickens serve on brown rice, or in a bowl, or on a plate, or on whatever (or whoever) is handy. 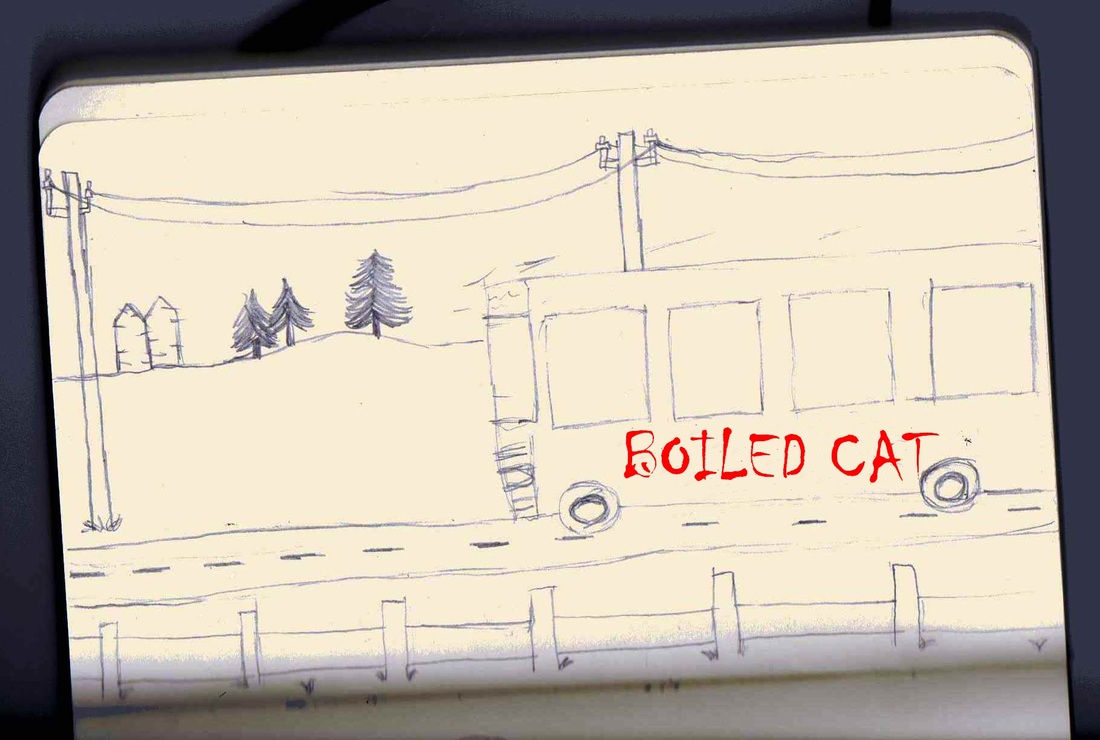 What is the stupidest thing you’ve ever done?

Thrash: Let Kevin talk me into riding a little kid’s tricycle down a mountain.
Kevin: Oh come on! It was awesome!
Thrash: Oh yeah . . . awesome.
Kevin: So me and Thrash were on our usual Saturday garage sale hunt for the perfect record. You know the kind – where the vinyl doesn’t have a scratch on it and the band is totally unheard of but amazing at the same time.
Thrash: Cue the hard on.
Kevin: Well, we were driving around and I spotted this daycare that was closing out.
Thrash: And it had all these tricycles lined up out front.
Kevin: Two of them were just huge! Like, massive.
Thrash: They must have been for a five or six-year-old or something. It was crazy.
Kevin: So I buy them and throw them in the trunk.
Thrash: If I had known what he was planning, I would have taken the bus home.
Kevin: So I drive to the top of this really big hill.
Thrash: It wasn’t a hill. It was a mountain with the road spiralling up it like a
corkscrew.
Kevin: Whatever. Anyway, the road was super smooth. They’d just resurfaced it the week before. It was perfect.
Thrash: You’re way too into perfect.
Kevin: Thank you.
Thrash: Huh . . . Well, Kevin gets to the top and pulls over. Then he hauls out the tricycles and says . . .
Kevin: “Let’s see how fast these babies go!” I’m pretty sure I was screaming.
Thrash: I’m the one who should have been screaming. The trikes were totally beat up and rickety.
Kevin: They were just a little rough.
Thrash: The bolts were loose, they were covered in rust, and they
reeked of peanut butter.
Kevin: Just a little rough.
Thrash: If you say so.
Kevin: So me and Thrash get on and head down the hill . . .
Thrash: Mountain
Kevin: . . . on these little red trikes. Our Feet were stuck out straight in front of us . . .
Thrash: Because there’s no way to put your feet on the pedals without mangling your knees.
Kevin: And with the speed of the pedals, we couldn't keep up with them anyway. We were just flying down that corkscrew road.
Thrash: And the trikes were rattling like crazy, it was nearly impossible to steer, and one side of the road droped off in a sheer cliff.
Kevin: Still we were doing okay.
Thrash: Until my bike shook itself apart.
Kevin: Hey! That saved your life!
Thrash: I was trying to keep the bike as close to the wall of the mountain as possible and away from the cliff. The thing was barely steering when this Big Semi-truck heads around the corner, right at me.
Kevin: You must have been doing sixty kilometers per hour by then. I had stopped. My front wheel jammed up. But I could see Thrash on the road
below me, because of the corkscrew thing.
Thrash: My whole world became truck grill, headlights, and horn Blaring for me to get out of the way.
Kevin: You should have seen the look on the driver’s face. It was like he couldn’t quite believe what he was seeing. A punk on a trike on the side of a
mountain – "what?!"
Thrash: The trike was rattling. The horn was shrieking. The engine was roaring.
Kevin: You were screaming.
Thrash: The truck was nearly on top of me. I mean I was so damn close all I was breathing was diesel and rubber.
Kevin: Then the bike exploded.
Thrash: There was this high pitched squeal and the whole tricycle flew apart.
Kevin: And Somehow, when it disintegrated, it threw Thrash right onto the side of the road.
Thrash: The wall side – not the cliff side.
Kevin: Yeah. And the truck ran over what was left of the trike like, only a millisecond later.
Thrash: The guy didn’t even stop.
Kevin: He Probably thought you were some kind of hallucination brought on by bad gas station sushi.
Thrash: All gas station sushi is bad.
Kevin: True.
Buy the Book