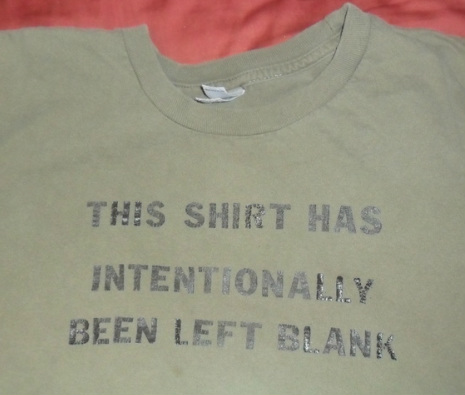 Will has some really great t-shirts. Here is a list of just a few:
- I wish for a world of peace, harmony, and nakedness.
- (Front) ommmm... (back) Nom nom nom
- I'm big on Mars
- The high cost of low living
- Coexist
- (front) I'm a player. (Back) a Bass player.
- Punk may be dead, but you can still play with the corpse.
- EPIC
- A vote for me is a vote for me
- Music is an escape, not a competition.
- Change your underwear. Change a life.
- I promise nothing
- the only good cat is a mummified cat
- living the dream
- A proud member of the running with scissors club
- tout uncommon.
- これは高価なTシャツです。(throw this into google translate to see what it says)
- I am naked under this shirt.
- Think! It's not illegal yet

Kevin thinks This guy is wild 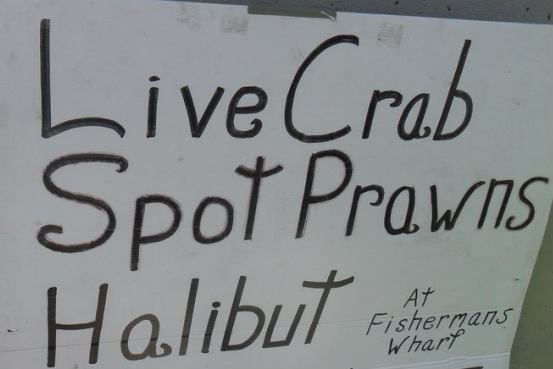 SUn's been looking at me. Little teasing sideways glances. Coming up to me in the hall when Will's not around. Surprising me in the hotel room when I'm by myself. I haven't done anything. haven't said anything. I know bands break up over less and I don't want that. But - she so hot. 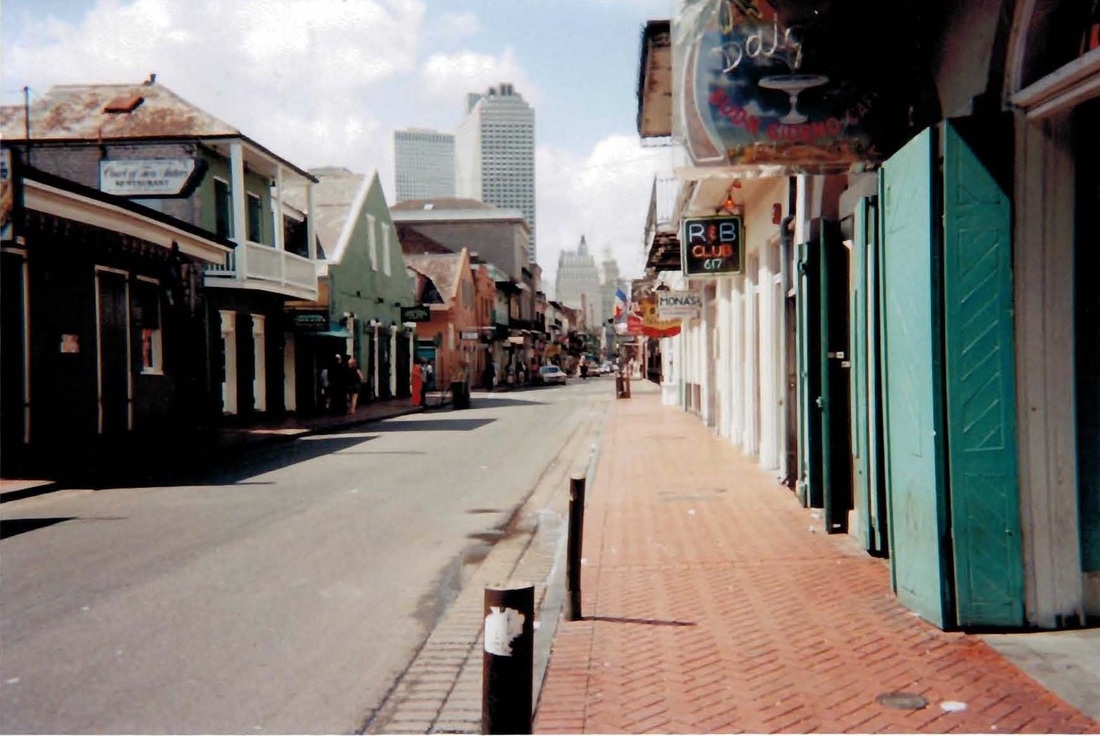 I hate it when Sun eats hot dogs. Kissing her tastes like death. 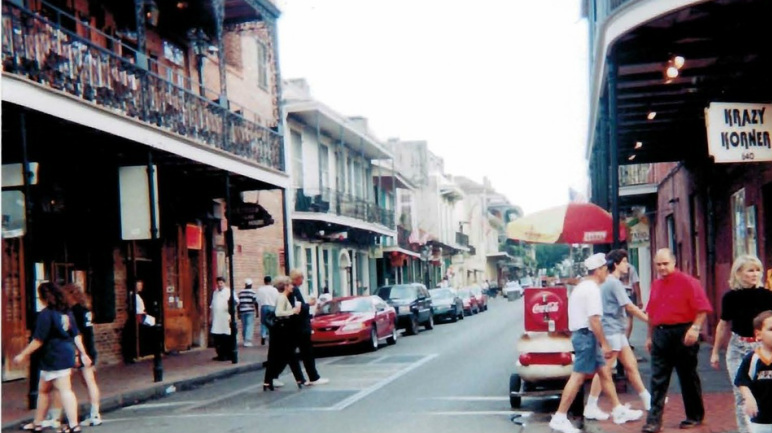 It kills me when Kevin does drugs. All I see is skulls through the smoke. a brilliant guy who's going to destroy himself if he's not careful.
DO NOT PUSH

Thrash is so paranoid. I'm only experimenting. It's really no big deal. None at all. Pot's not addictive. Neither is Hash. So why is he being such a dick about it? Besides, given what I have to deal with. I need this. 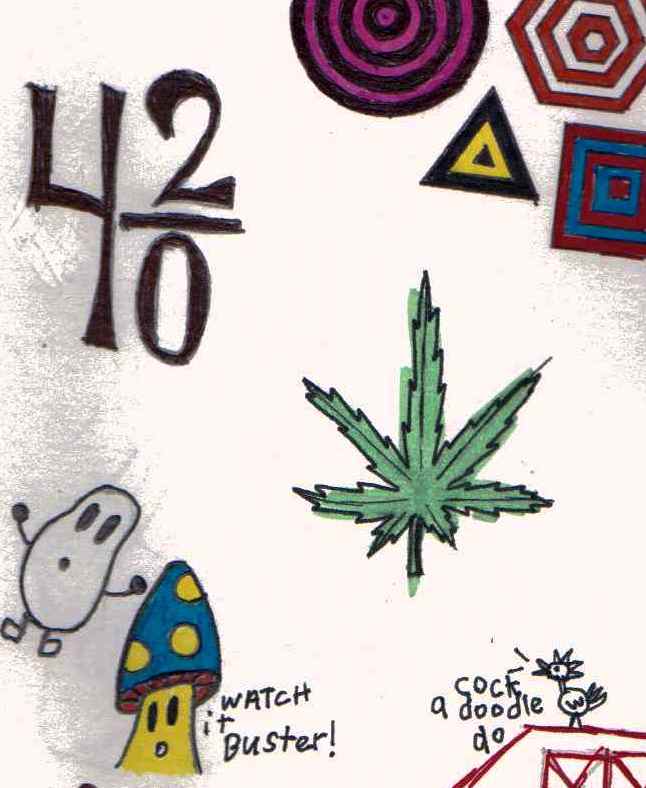 Will is a joker. He never takes anything too seriously. Piss him off and he’ll get you, not with a fist, but with a rubber snake launched from your cereal box or a pile of dog crap on your beeping alarm clock. And Yeah, getting tricked will probably make you mad at first, but when everyone's laughing - well . . . you gotta laugh too - or you’re a dick. Know what I’m saying?

Yet another reason I do not want to go to church. 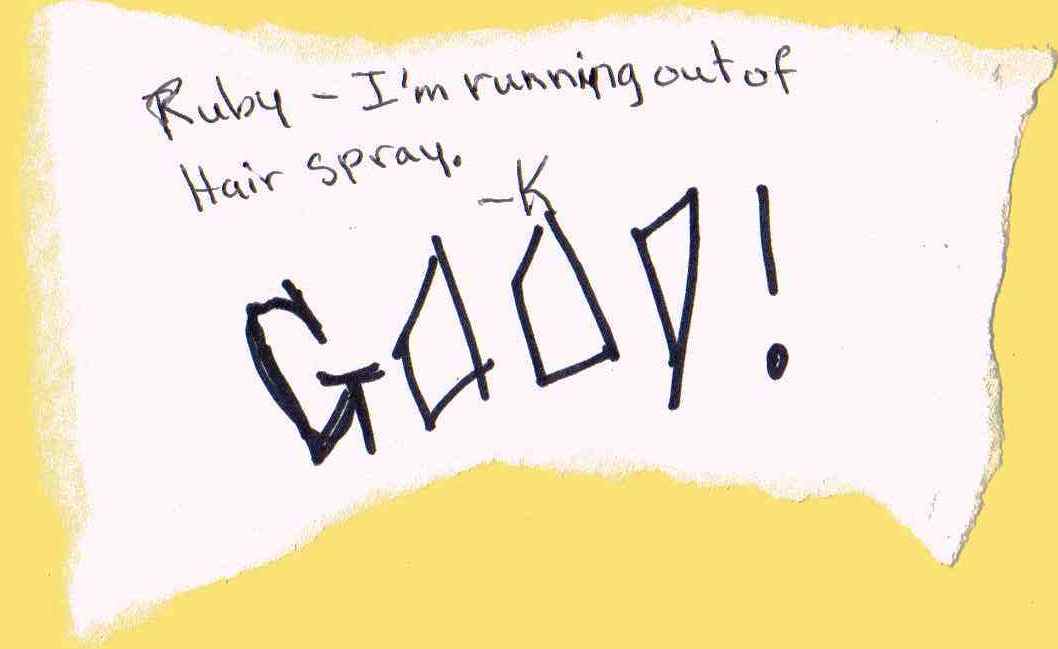 Stupid saggy-faced bastard! You think you're everything. You think you're so cool. Dragging my friend into your little druggy world. People like you. LIke Sun. with your pills and pot and egos are nothing but dirt. You need people like Kevin to justify your actions. You aren't brave enough to live life yourself. 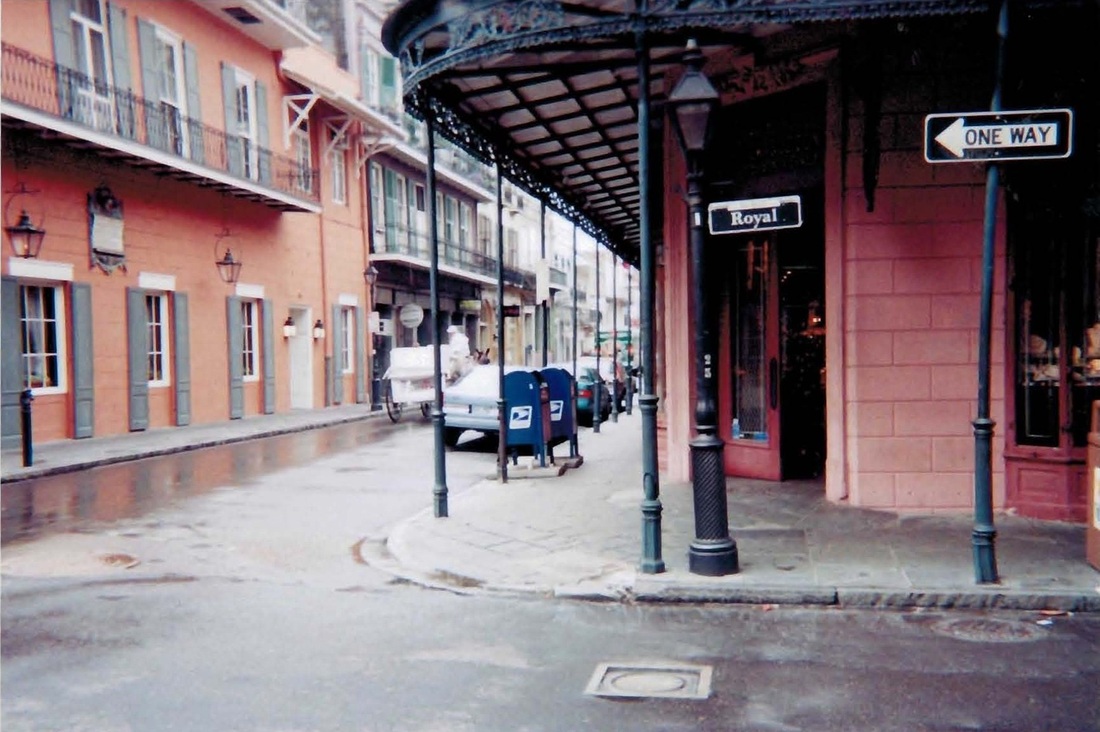 What Kevin would do to Boiled Cat if he ever got the chance. 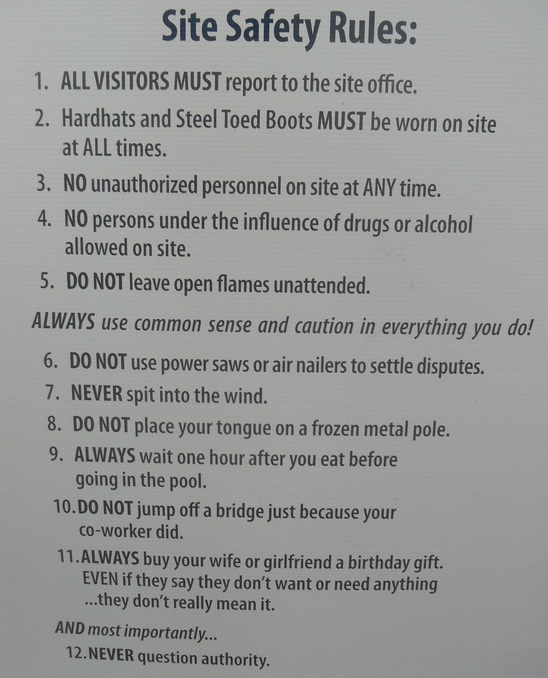 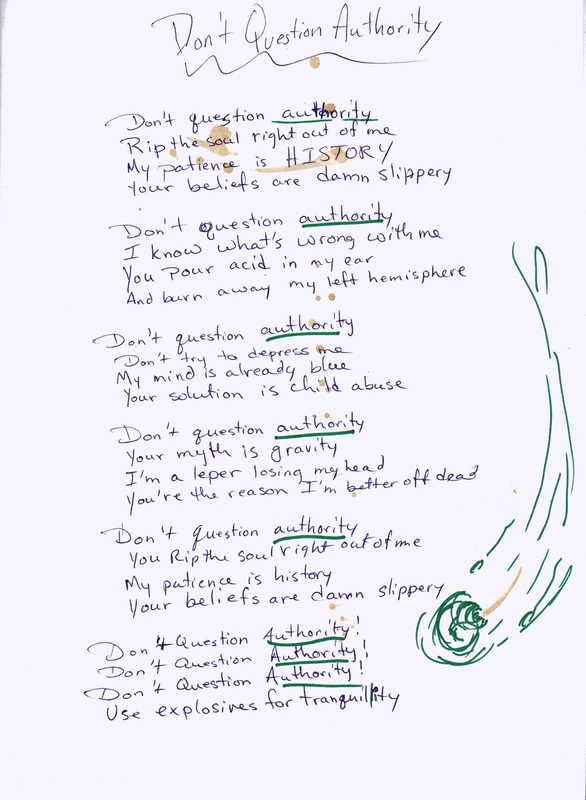 Jessie Tollestrup did another one of our songs. She's so amazing! 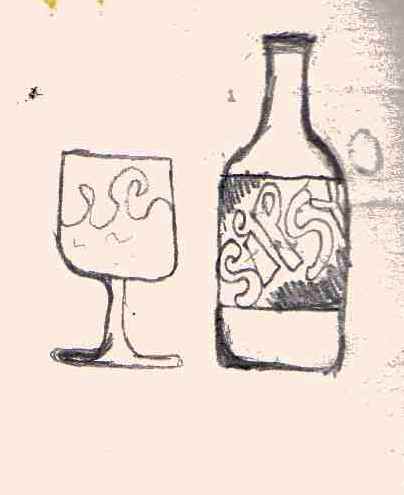 Jayson may have had too much tonight. 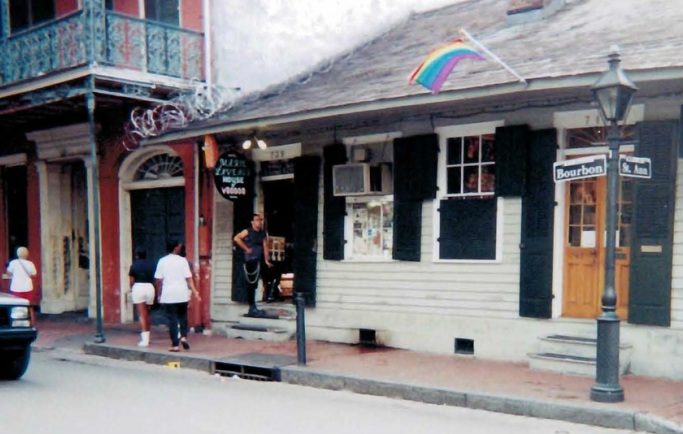 I love the barbed wire on the rooftop! So awesome.

Okay - this one isn't vegan. I'm the first to admit that doing this is wrong on so many levels, the least of which is animal cruelty. But it's really funny. SO if you can overlook the moral implications, the result is to die for.

Get: One bed, One pillow, as many trays of jell-o as you can lay your hands on (lime flavoured is the best - it's just so refreshing), 10 cans of spray whip (the edible oil product kind), and one sucker.

Make: Pull the covers back on the bed and put in all the jell-o (cubed is best - but any kind will do). Don't do this too early - the jell-o will melt. You will need to time this so that your sucker is coming in to eat right after you've made this great dish. Once the bed is made, put the covers back on and work on the pillow. Remove the pillow from the case and stash it under the bed. Fill the now empty pillow case with your spray whip until it looks like it's a pillow. Lovely.

Enjoy: call in your sucker and wish him or her a good night. Wait for the screams. Once that happens, you know your dish is done.

Don't let will See This!

I think Jenna-Lee and Thrash just got serious  - Will 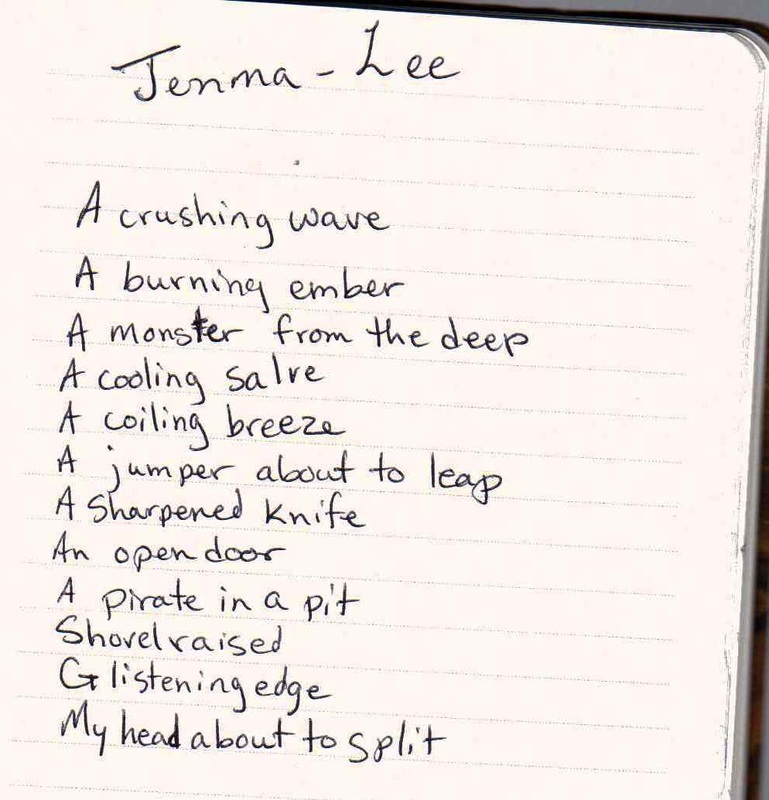 Has the band ever done any bonding exercises?

Will: Well there was the time I took the band camping way up in the mountains.
Paris: In January.
Jayson: With no tent.
Kevin: It was freaking cold.
Will: We built a snow shelter.
Thrash: It was probably the most awesome thing in the world. We made this giant snow hill then we hollowed it out.
Kevin: Because sleeping in snow when you’re already cold, is the best.
Will: Snow is a great insulator.
Kevin: It insulated your common sense.
Jayson: That was the first time I've ever seen Thrash actually get tired.
Thrash: I would have been less tired if you had helped more.
Paris: He couldn't help. we would lose him in the snow.
Will: It was kind of hard to pick him out against the background.
Jayson: Shut up. At least I didn’t catch fire.
Thrash: Oh yeah, I forgot about that. We built this great big fire after  supper and decided to jump over it. It was freaky flying through the yellow flames. And every time someone’s boot would hit a log, red sparks would fly up against the black sky.
Jayson: And Then Paris tripped.
Kevin: We were all yelling stop drop and roll, but no one was really helping him.
Will: Yeah. We were all laughing too hard.
Paris: thanks guys.
Jayson: Paris rolled right to his feet and kept running.
Kevin: He looked like the human torch.
Will: Oh come on, just his pant leg was on fire.
Paris: Just.
Will: You still didn’t need to body slam the shelter, Jayson.
Jayson: It put out the fire.
Kevin: And saved us from having to stay the night.
Thrash: That sucked.
Kevin: You’re nuts.
Jayson: Anyway, that was pretty much the last band bonding type
thing we did.
Will: Thrash and I went camping by ourselves a few weekends later. It was much better.
Thrash: Yeah, it was really fun.
Buy the Book